The house always changes slightly, in height and style, but it’s always old…with a grand staircase that spirals up into hidden zeniths.

I miss you so. I just woke up from a horrible dream, but you’re not here to whisper the fright away. Just as it began, I half awoke and a part of me knew that I’d had the dream before, that it would be awful, and that I would see it to the end anyway. By the end I awakened with tears streaming down my cheeks, and with no one here to really talk to, I thought binding my nightmare in ink might purge it from my thoughts … So I’m sending it across the ocean to you.

The house always changes slightly, in height and style, but it’s always old, dimly lit, and painfully white with a grand staircase that spirals up into hidden zeniths. At the bottom, there is a white marble table with a candelabra—the five quivering flames are the only light to be found. I reach out and grasp the graceful silver in my fist, then begin to climb, holding up the crisp skirts of a beautiful silk gown. 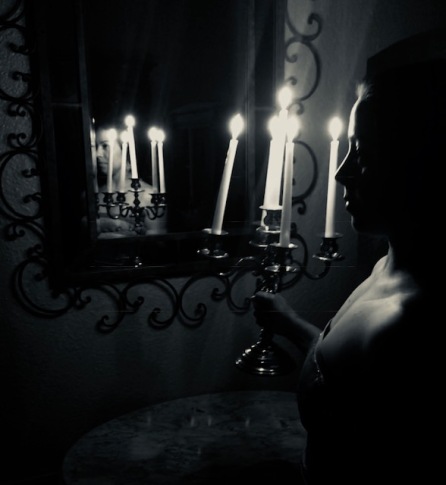 Floor after floor, the metal becomes heavier and heavier. My fingers tingle and I stop to switch the candles from one shaking hand to the other. And as I ascend higher, I can feel the pressure increase until it feels like I’m deep under water—there is a weight on my chest, sound becomes muffled. I have to force myself forward. And this sound begins to build in my ears, painful and encompassing, as if it’s coming from the walls themselves. It’s like the engine of a motorcycle—a bleating, ripping and grinding sound all combined—but decelerated to a fearful grating vibration. It gets worse and worse until there is also a ringing in my ears.

I don’t know what compels me to keep going, but I’m in such a hurry to get to the top. I must reach my destination, despite the growing dread and the fact that I already know a terror awaits me. Step by step, I continue into the dark and stifling heat of the upper levels until I’m faced with a wooden door looming thick and heavy in the flickering light. I’m sticky with sweat, and those deathly vibrations feel like they’re rattling my bones apart.

I reach out a hand and pull on the cold, metal handle to no avail. The pressure has immobilized by lungs. Following some masochistic instinct, I set down my light and throw my whole body at the door as hard as I can. On the third try, it rips open into complete blackness. I’m frozen in horror. I want to scream but my lips are sealed shut. Some minuscule part of me whispers that if I can utter some small sound, even a gasp, into the deafening, paralyzing, throbbing silence, it will break the hold this crushing void, this maddening nothingness, has on me.

I force my hands up to my face, trying to find the seam of my lips but I can’t find my mouth. It’s gone. Nauseated and panicking, I scratch at the smooth expanse of featureless skin. I trace where my lips should be then gouge through the soft tissue and worm my bloody fingers between my teeth and gums, forcing open a tiny gap for a half teaspoon of air to escape. I push out a breathless, senseless screech—more animal than human—and stumble backward out of the room.

I turn to run, but trip over the candelabra. The five white tapers fall and as I watch, the floor and wall where they land start to darken and thin lines of smoke rise up, swaying like cobras. As the air thickens, I gather my skirts and throw myself over the banister … only to fall forever.